70 Year Prophecy Of The End 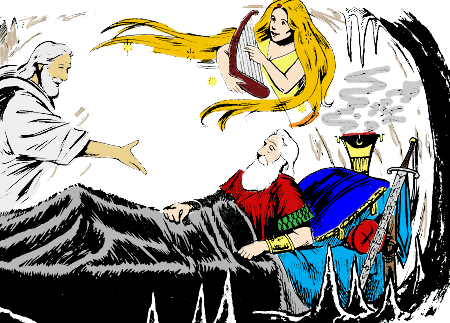 REMEMBER WHAT I’VE OFTEN TOLD YOU ABOUT HOW THE PROPHETS SEE THE FUTURE? It’s often like looking over a range of mountains. We used to drive out in Arizona & you’d look far across & you’d see this range here & this range here & another range here & another range here, just the tops of them. And in the haze of the distance, about all you could see was the skyline then & it looked like all one range of mountains. As you kept driving closer & closer all you could see was the range in front & you thought that was it, but when you climbed up that mountain & you got to the top, some of those mountains you thought were the same range were another 20 or 30 miles away!…from “Leave Yourself Open” DO #1934

On the 18th of February 1919, a very great and important prophet was born into the world; who was to “be called David by divine anointing and to whom it was given to perceive the number of years which, according to the prophet Jeremiah, would pass before “The End of Desolations”.

In 1966, the same year she received the famous Warning Message Prophecy of the Great Confusion, David’s mother prophesied that the Lord would promise to reveal to him the number of years unto “the End of Desolations”, like He had to Jeremiah.  David said of this revelation: “This sounds like the Lord means that The End will come after the end of that 70 year period, or sometime after the year 1989, the predicted year of the end of my life, or “the days of my years“, as it says that these 70 years will pass before the End of Desolations, perhaps just shortly before. *Unless of course The Children of David were not yet “fully prepared” for  end time events; Maria’s time to shine  with her ministry of getting out a whole training program for elite end time warriors was yet to come! Perhaps the purge and the Reboot brought on a  required “refitting period”. There was a lot to do after David’s passing.

“THEREFORE I WILL GIVE UNTO THEE WHATSOEVER THOU ASKEST & whatsoever thou needest to accomplish My purpose & to fulfil My will & to complete My kingdom before that great & awful day that shall come to pass!”

According to David in his interpretation, “the days of his years”, passed in 1989. Reflecting on that statement it would seem that although his birth and life was important, what was far more significant was his ministry as the anointed Prophet of the End, which the Lord was indicating would end in 1989.

There were some noteworthy events in 1989…”Lament in the Night” was published and many missionaries were returning to their home fields, which seems to go along with David’s ministry of (millions for the billions) coming to an end with the fulfilling of his dream of pushing Papa’s posters. I’m reminded of Matthew 24:14 when I think of the millions of pieces of literature distributed by The COG/Family which culminated in the distribution of full color posters worldwide. What a truly supernatural witness to all nations.

What I’m suggesting is that Matthew 24:14 may well have been fulfilled in 1989, and according to David’s interpretation: “The End will come after the end of that 70 year period, or sometime after the year 1989”

David’s death was an important event, but not as momentous as his ministry as the Lord’s anointed end time prophet; a ministry that obviously fulfilled Matthew 24:14.

fwiw: Another interesting observation regarding David’s destiny: the Lord told David that he had called him to give America and indeed the world the message of Jeremiah (the message that started the Jesus revolution!); According to history Jeremiah preached to Jerusalem for forty years; what’s interesting about that number is if you add 40 to 1968 you get 2008…the year the “Change Journey” was written, which, for me, kind of “sealed”  the end of David’s ministry. But, as was mentioned earlier, a purging of the “old church” was to begin and then end with the culmination of a new end time ecclesia. (see Elegy By Jesus: Mystical-bible You Tube video)

“ALL THE THINGS I HAVE SHOWN THEE HAVE COME TO PASS…Thou shalt be more vile also & thou shalt expose thyself even more that I may be glorified, & they shall know that it is not thee, but Me, & that thou art nothing & base & despised. Even as David sinned, yet I called him a man after My Own heart, who did sin but glorified Me knowing that he was not, & gave Me all the glory. Even so shall it be with thee Thou shalt be despised in their eyes that I may be glorified.”

“Claim the keys of desperation so that when you prophesy you will be as a miner searching for hidden jewels. Claim the faith of the prospectors who must spend days, nights, and weeks digging, mining, and searching for that which they desire and need.”

70 Year Prophecy of the End

Obviously it was not given to David to fully understand the 70 year Prophecy of the End, he even said in that same letter: “just please don’t go around telling everybody that I predicted these dates, because I didn’t—the Lord did! And if they don’t happen just like this, don’t blame Him—but blame us for not having interpreted His predictions properly, but personally‚ I’m inclined to believe that these dates are mighty close, if not exact, and if there is any error, it is due to the frailty of our human understanding, and not to the failure of God!”

To quote David’s own adage, “mountains viewed from far away seem like one mountain range”. It is never good advice to put times and dates on future events.

By keeping to the spirit of Matthew 24:36; being that: “no man will know the time of Jesus’ arrival (at least not until a certain signal is given….Matthew 24:15…which incidentally is slotted after the suggested fulfillment of David’s destiny of Matthew 24:14). We would keep ourselves safe from making the mistake of numbering the year of the return of Jesus. To quickly summarize; it would appear that the 70 year Prophecy of the End is stating the “End of Desolations” would come to its final end after the end of David’s days or ministry. So don’t plan around any specific year, but instead keep looking for the signs of the beginning of the final desolation.  Matthew 24:15 and Revelation 13:16 are excellent pointers.

A Key Prophecy to the Endtime

One thought on “70 Year Prophecy Of The End”