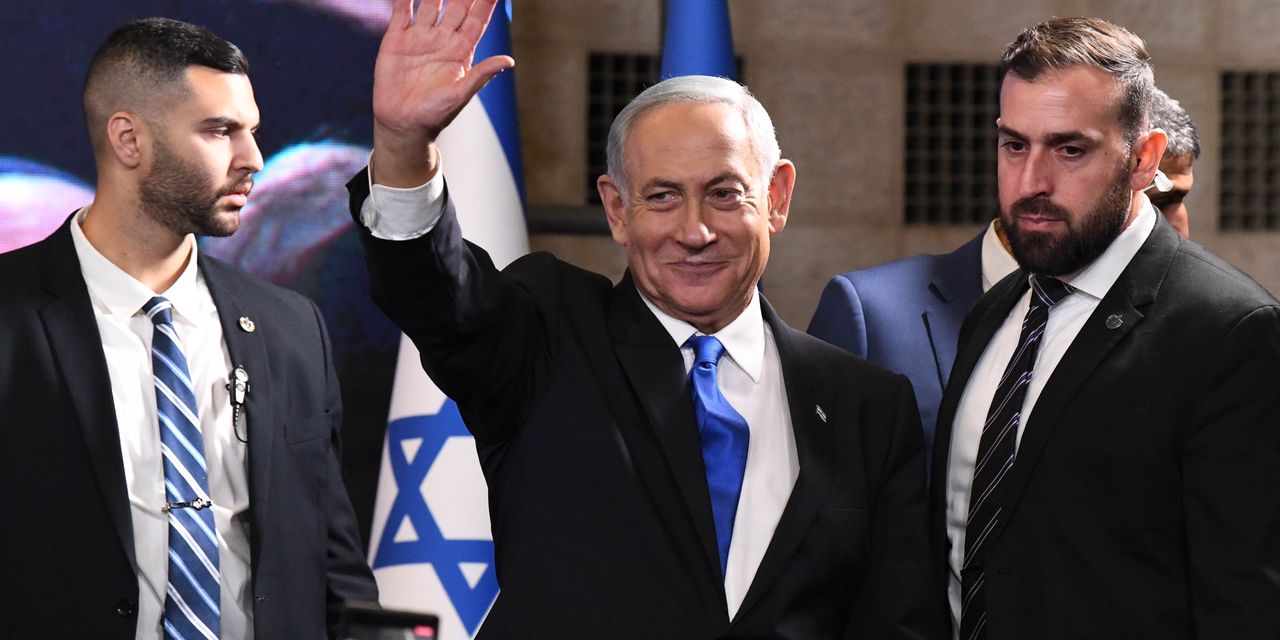 Netanyahu, a Man of War! Prophecy and article from 1996…(as of 2022 still in the race as hopeful for Israel’s next Prime Minister.) BBC: “His dramatic comeback will seal the belief among his supporters that “King Bibi” is politically invincible.”

Curtain time! Curtain time! The stage is set. One, two, three–action! This is it! The curtain goes up in the Endtime play–the greatest show on Earth! It won’t be long now, for I do set the actors in position. I give them their parts, I assign the roles, and I pass out the scripts for the final scene.
This one, Netanyahu, plays a leading role in My Endtime play. For have I not said that the evil one of the Last Days shall fight wars?–And not one, nor two, but five? Therefore, with whom shall he wage war but with yet another man of war. Is this one not hard-line for his cause? He stands strong, firm in conviction, and is not afraid of war. He opposes peace and is willing to fight for what he believes. And he who opposes peace shall fight in war.
This one accuses others of the same sin of which he himself is guilty, for he is as a pot calling the kettle black. For was not his Israel founded and built on terrorist activity? Were not these, who call themselves Israel, established by guerrilla warriors and murderers, criminals who massacred My innocent people? Does he not take on the same hard-line tactics? He vows a vow, and his desire is to stick to his guns–guns and weapons of war to defend his land. He does not seek peace and to share. And though there be those walking beside him who would seek to yield and to make peace, this one is not agreed. He seeks not peace, but war is in his heart.
Therefore watch and pray, My children, that you enter not into temptation. Watch and pray that you be not overtaken as by a thief in the night. Watch and pray and work My works, before the night is upon you when no man can work. I will lead you a step at a time. I will lead and I will guide and I will reveal unto you, My children, at the given time, as the choices are made, a step at a time. Watch and pray that you be not overtaken as by a thief in the night.
The curtain is going up for the final act! The rulers of the Earth and the kings of men are in My hand. It is I who will put up one and take down another, for all that I have spoken through My prophets will be fulfilled.
I do put this one in place at this time that My purposes be established. For he will rule with a hard hand. He will not be afraid to stand up to the Evil One. He will resist and stand his ground. There will not be one jot or one tittle that will not come to pass. For these are tools in My hand and I do use them to prepare the way for My return. Be prepared, the curtain is going up! (End of prophecy.)

Netanyahu, a Man of War!

Benjamin Netanyahu, present prime minister of Israel, is popularly known as “Bibi.” At 46 he is the youngest prime minister Israel has ever had, and he stands out sharply from Israel’s traditional politicians and party insiders. Admirers and critics alike describe him as an ambitious, driven perfectionist.
The son of a Cornell University professor, Netanyahu spent most of his teenage years in the United States, attending high school in a Philadelphia suburb and studying architecture and business administration at the Massachusetts Institute of Technology (MIT).
He returned to Israel for army duty, serving in an elite army commando unit and reaching the rank of captain.

In 1976, Netanyahu’s older brother Yonatan died in the commando raid that freed passengers of a hijacked jetliner in Entebbe, Uganda. The death of Yonatan, who became an Israeli hero, strongly shaped Netanyahu. He set up the Jonathan Institute–using the English version of his brother’s name–a foundation that studies ways to combat terrorism.
There Netanyahu caught the eye of Israel’s ambassador to Washington, Moshe Arens, who named him his deputy in 1982. Two years later, Netanyahu became Israeli ambassador to the United Nations.
Netanyahu–well-connected and well-dressed–was a hit in Washington, parlaying the appointment into an important political post, from which he worked to end Israel’s international isolation and target Arab terrorism.
In 1988 he was elected to Israel’s parliament, the Knesset, and beat out a half-dozen rivals five years later to succeed Yitzhak Shamir as party leader.
During the Gulf War, Netanyahu became known internationally as Israel’s spokesman–giving interviews in unaccented English and once appearing on CNN in a gas mask.
In May of 1996, he was elected prime minister of Israel, narrowly beating Shimon Peres.

When Will The War Be Ended?

“Therefore watch and pray, My children, that you enter not into temptation. Watch and pray that you be not overtaken as by a thief in the night. Watch and pray and work My works, before the night is upon you when no man can work. I will lead you a step at a time.”

They that feed of his portion

Art thou come to take a spoil?

The elites have already mapped out your future, and it isn’t pretty, but don’t worry there’s plenty of entertainment to keep you away from thinking about it too much.

The elites have already mapped out your future, and it isn’t pretty, but don’t worry there’s plenty of entertainment to keep you away from thinking about it too much.