Snow White And The Seven Signs 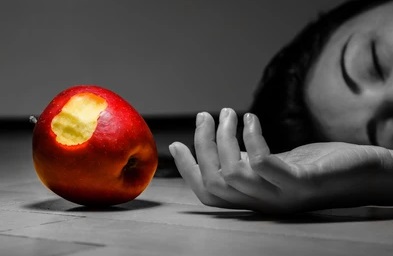 The Revelation of the Beast

“I was dreaming, but I kept coming in and out of the same dream. I was trying to remember a sentence or some words, and it was being repeated to me over and over, but when I awoke all I could remember was, I thought, the word “ta da.” There were other words in the sentence, but that was the main word that stuck in my memory.

I remember feeling quite depressed during the dream and even woke up depressed. So after waking up, I was praying about those words and a picture from a Mo letter came to me. I recalled that it had the lettering “ta ta ta” on it. The picture (below) is of the Antichrist. Now I’m quite sure this was what was being shown me in the dream. Following are the paragraphs from that letter that were being impressed on me.”

“My bride I am coming…I give My early warning system…not 40 days yet,  but a little longer. Is it not for My Word sake that I give you this one last warning, yea My loves, have I not said; David my servant shall be king over them; and they all shall have one shepherd: they shall also walk in my judgments, and observe my statutes, and do them.

I give this early warning at this time for My Words sake and for My servant David’s sake, for I promised that I would not lie unto David. I do this thing that you may know that there was a prophet among you. I do this thing for My sheep, those that are still lost in the brambles of this world. I do this thing for your sake, that you may snatch back your birthright, Go ye this one last time into the highways and byways and compel them to come in. Come out of Jerusalem, come out and die with Me this one last time. For I give this untoward generation no sign but the sign of Jonah. As Jonah was three nights in the belly of the whale, so is the world about to fall into great darkness.

Come out  of her My brides, come out, turn back, for the course you are on is the course of the worldly, heed the Words of Ezekiel and save yourselves from the coming wrath.  (see Ezekiel 37).

“Then he said unto me, Son of man, these bones are the whole house of Israel: behold, they say, Our bones are dried, and our hope is lost: we are cut off for our parts. Therefore prophesy and say unto them, Thus saith the Lord GOD; Behold, O my people, I will open your graves, and cause you to come up out of your graves, and bring you into the land of Israel. And ye shall know that I am the LORD, when I have opened your graves, O my people, and brought you up out of your graves, and shall put my spirit in you, and ye shall live, and I shall place you in your own land: then shall ye know that I the LORD have spoken it, and performed it, saith the LORD. (Ezekiel 37:12-14)

–And the Seven Signs of His Revelation! –Are You Prepared?

[Note: If you can remember, “It Can Happen Now” was the very first letter that set us on the course we are now on. It was this letter that initially pointed us to this year 2022, and now we see that all the Lord said through Dad is coming to pass. Now it is June once again but two years later, and again, Jesus has brought us to the lateness of time, but in a dream. Last time it was a revelation whilst reading Dad’s letters for Word time, but amazingly enough it was in the same month, June, I believe. (See “It Can Happen This Year 1992)]

[Note: November of this year, 2022; the impression I got is that Jesus is trying to tell us that the events in DO 2501 are going to unfold. Upon reading the month November, I was once again reminded of the letter,“40 Days and Nineveh Will Be Destroyed.” In that letter November was the first month mentioned and 3 times. I truly believe that November this year  is very significant and perhaps the last chance for any one still considering or wondering about all that is going in the world. The Words of David are shouting at us to warn others and make plans for tribulation. Wake up, dear Children of David. Wake up and tell others that the end is about to unfold.] See PODCAST “Snow White and the 7 Signs”.

–For when they shall cry, “Peace, peace!”–then cometh sudden destruction! (1Thes 5:3)

[Note: The darkest day, could it mean the revelation of the Antichrist, and it is one week (7 years?) before he passes behind the sun (Son) and Jesus then takes over the world?]

The following prophecy received on the 6th of June also offers two hints that align us with the month of November.

“These devils are planning and scheming and doing their best to avoid the inevitable. They don’t want egg on their faces. That has happened a few times over the years, and they don’t like it. You see, not all their plans bear the fruit they desire. My children’s prayers, coupled with the unmovable force of My will have thrown some serious spanners in their machinery. Slowly but surely these usurpers have been squeezed into the Endtime funnel, and like all funnels, the neck tightens as one gets closer to the neck’s exit. Their master, Satan, knows what is about to transpire, and naturally he is very secretive. If word were to get out that he’s playing a very risky gamble, there might be some dissension. And at this stage in the game, that would not be good at all. So the plan is to set everything in motion this year. Action stations, everyone! The Devil would love to set the Christian world back on My much-celebrated day, the day I entered the earth realm on My quest to destroy his kingdom. When studying My Word, both in the Bible and the Words of David, don’t just look for one fulfillment, for quite often there is more than just one. I love to squeeze every last drop out of the orange of experience that My children pass through whilst on earth. These lessons and experiences that My saints of old past through are an example to you, a means of finding your path through these days that you now pass through.

I have told you that I reveal My secrets unto My servants, yet at the same time.  I also hide the truth from My enemy. I hide My precious veins of truth in the deep recesses of My Kingdom, but always there is a fleck of truth left uncovered for those who are searching and seeking for the hidden treasures of darkness. This letter #280 is one of those flecks of gold that will lead you to the prize. Don’t despair; as you go deeper, you find bigger flecks and an occasional small nugget…the mother lode is close. Yet, this My brides, is only one shaft, one mine. There is a universe of full of wonders and hidden treasures, and there is all eternity to discover the mysteries of My Spirit. I revealed to you back in 2020 that this year 2022 would be a pivotal year, and it is. My treasures often run like veins, there is a main branch, but every now and then there is an offshoot that may lead to another treasure. This time, My brides. stay on the main branch and the prize will be yours to reveal to others.”

Note: A double fulfillment as was suggested in “My Birthday Surprise” prophecy 6th June, 2022. Years leading up to 2021 the years of David and war…the Reboot years (declared peace) 2011 to 2021 …2021 the year the vax started, the war years began again.

What Is the Image of the Beast?