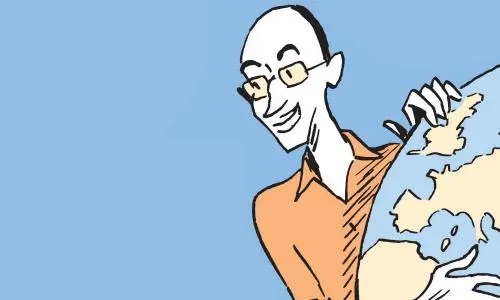 THERE IS SOMETHING VERY STRANGE ABOUT THIS MAN

I was browsing the news yesterday and the following headline caught my eye: “There’s something very strange about this man, “The Prophet”, Yuval Noah Harari. I was on my cell phone at the time, so I clicked the link and instantaneously my phone went off! It just shut down! I tried to restart it by pressing the start button but it could only manage a very brief flash. I gave it to my son who fiddled with it for some time and finally decided to plug it into the charger. Once connected to the power, the phone showed 1% battery. But my phone battery was 88% a short while before I clicked that link! …I’m convinced that my phone’s battery had been drained by that link. The whole experience was very spiritual.  Just think, if that link could drain my phone battery, imagine what would happen to your spirit if you listened to this very strange and obviously demonic false prophet Harari; especially if you were not protected by the Holy Ghost. (End of testimony from Lisa)

And I beheld another beast coming up out of the earth; and he had two horns like a lamb, and he spake as a dragon. Revelation 13:11

“One more tumbler has fallen into place. It’s not the last, but it is one more in the series. This is yet another key that has been waiting to find its designated slot in the Final Key. There are millions of keys required to complete the Final Key that your prayers set in motion some time back. People, events, the mark, the Antichrist, the false prophet, you and the decisions you and others make, all are part of the final Key. Now that you are looking back from across the veil, you are able to see these things with more clarity. And rightly so, because once someone crosses the spiritual meridian, the distortions, lies and muddy waters of the world disperse, and you no longer see through that darkened glass called the carnal mind.

As has been revealed, the last 1260 days have begun –the long-awaited, magic hour when time stands still for some, speeds up for others, yet for all who have not made a move to “higher ground” it is a time of great tribulation. Now is the time of the Keys, and as the Keys begin to heat up, as they burst into flame, so will the forces of Satan come forth and show their mettle, for the Keys call them out of their dark places to play their part in the final act. Their evil is even now pervading the airways, fouling the minds and spirits of all those who listen to their words and whispers and dark sentences. And he (the false prophet) had power to give life unto the image of the beast that the image of the beast should both speak, and cause that as many as would not worship the image of the beast should be killed. And in the latter time of their kingdom, when the transgressors are come to the full, a king of fierce countenance, and understanding dark sentences, shall stand up. Revelation 13:15, Daniel 8:23

Click, click, click the tumblers fall into place as the Final Key moves toward that final day, and He that now letteth opens the way for the man of sin. For the mystery of iniquity doth already work: only he who now letteth will let, until he be taken out of the way. And then shall that Wicked be revealed, whom the Lord shall consume with the spirit of his mouth, and shall destroy with the brightness of his coming: 2Thessalonians 2:7-8 This is his hour, the Serpent’s final bid to control the world, lock, stock and barrel. As this war of the worlds was initiated with words so will it end with words …Now the serpent was more subtle than any beast of the field which the LORD God had made. And he said unto the woman, Yea, hath God said?…And he had power to give life unto the image of the beast, that the image of the beast should both speak, and cause that as many as would not worship the image of the beast should be killed. And the serpent cast out of his mouth water as a flood after the woman, that he might cause her to be carried away of the flood. Genesis 3:1, Revelation 13:15, Revelation 12:15

Beware, My children, lest you take his despoiling fire into your bosom; it is the flood of words from the evil one, the poison from the viper’s forked tongue that will carry you away. Pull back from those windows that face the streets of this world and close the shutters. Come into the inner parlor of our home of hearts and abide with Me until this evil be passed over. I have called you across the Jordan.  Come quickly; cross now and leave its shoreline by moving deeper into My Spirit. Don’t look back lest you share the fate of Lot’s wife. Don’t stand there at your window with your eyes on the comings and goings of those trapped in the world, listening to the gossip and latest happenings, the clattering and clanking of passersby, the noise which is made by those who have not discerned the signs of the times. Draw back now and take My hand. Draw the curtain and open the veil on My side of the room and enter quickly. Once inside this hallowed place, quiet your spirit and listen to the whispers from within the temple of your heart. These voices are from the whisperers, those that care for your soul, those that are sent by Me to lead you through the final hour. These are the ones who prepare the bride for My coming. “Then shall the kingdom of heaven be likened unto ten virgins, which took their lamps, and went forth to meet the bridegroom. And five of them were wise, and five were foolish. The wise took oil in their vessels with their lamps. While the bridegroom tarried, they all slumbered and slept. And at midnight there was a cry made, Behold, the bridegroom cometh; go ye out to meet him. Then all those virgins arose, and trimmed their lamps. And they that were ready went in with him to the marriage: and the door was shut.” (Matthew 25)

The world is being swept away in the flood of lies that spews forth from the mouth of the wicked one; they are swallowing all his deceptions, those noxious vapors intended for My elite. The world are gorging on his scraps. His meat is laced with poison, his dainties with fatal venom.  And the earth helped the woman, and the earth opened her mouth, and swallowed up the flood which the dragon cast out of his mouth. Revelation 12:16  He sees you drawing back from his trap; he perceived that your eye had caught the snare and he saw your foot hesitate, then pull back, one step and then two, as you turned your face toward Me. He snarls as he exclaims: “Your Word says that ALL will worship me!”- “Not all, snake”, I say, “Step back, for these ones are Mine. These are they which follow the Lamb whithersoever he goeth. These were redeemed from among men, being the first fruits unto God and to the Lamb. Get thee hence, Satan, for you do not savor the things of God.”

My loves, with the Keys of the Kingdom I will bind you to Myself and with the Keys I will loose that which I have held back for millennia. Do not think there is yet four months till harvest. Nay, My loves, the harvest is ripe and I send forth My angels to make ready the great wine press of God. I say the time is ripe unto harvest, the night is far spent, and I have sent My prophets into the world to warn all, in order that you make preparations for My soon coming. Trim your lamps for your Bridegroom comes. And I looked, and behold a white cloud, and upon the cloud one sat like unto the Son of man, having on his head a golden crown, and in his hand a sharp sickle. And another angel came out of the temple, crying with a loud voice to him that sat on the cloud, Thrust in thy sickle, and reap: for the time is come for thee to reap; for the harvest of the earth is ripe. And he that sat on the cloud thrust in his sickle on the earth; and the earth was reaped. And another angel came out of the temple which is in heaven, he also having a sharp sickle. And another angel came out from the altar, which had power over fire; and cried with a loud cry to him that had the sharp sickle, saying, thrust in thy sharp sickle, and gather the clusters of the vine of the earth; for her grapes are fully ripe. And the angel thrust in his sickle into the earth, and gathered the vine of the earth, and cast it into the great wine press of the wrath of God. And the wine press was trodden without the city, and blood came out of the wine press, even unto the horse bridles, by the space of a thousand and six hundred furlongs. Revelation 14:14-20 (End of prophecy)

“Give no place to the Devil. The longer you wait to hear from Me in prophecy when you have a battle or problem or question, the stronger the negative emotions become, and then the Enemy uses those negative emotions to continue to keep you from coming to Me.” (ML 3255:111)

If you want the Podcast of this blog DOWNLOAD HERE

“I think that you got some prophecies or were considering that Yuval might be the false prophet of Revelation 13. His middle name is Noah, meaning in Hebrew, rest/comfort. Again, what a perfectly predestined name for a false prophet that thinks that his fourth industrial revolution will bring humanity rest and comfort. By the way, he’s also gay. So Yuval can already “boast” of fulfilling two of his pal, the AC’s descriptions in Daniel 11:36, 37 “…and he shall exalt himself above every god and shall speak marvelous things against the God of gods…neither shall he regard…the desire of women.” (End of comments from Sam).”