Got your key, then let’s go

Oct 28, 2022 666 digital banking, Endtime, keys are our wilderness, Keys of David, Keys to the Kingdom, living-by-faith, NWO, people of the keys 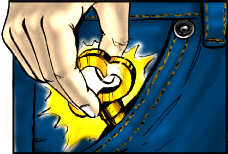 Since time immemorial, governments have shown their proclivity for control. They love to know who is who, and they are especially fond of knowing who isn’t paying taxes; which we find was the incentive behind Caesar Augustus’s world-wide census during the days before the birth of Jesus. (Luke 2:1. And it came to pass in those days, that there went out a decree from Caesar Augustus that all-the world should be taxed.)

King David’s lack of faith in God’s ability to save or keep safe the nation of Israel is implied by Joab’s reaction to David’s request:

By the way, this census didn’t end too well for Israel; 70,000 souls lost their lives due to a pestilence sweeping the land.

There are two occasions that I know of in the Bible where God ordered a census, they can be found in Numbers 1:1,2 and Numbers 26:2.

Now when God asks for a census, we can be quite sure there is some good reason behind it. However, when man authorizes a census, chances are there’s a reprehensible motivation somewhere behind the move.

Let’s update this and see what man is up to in our modern age, but more importantly why he’s up to what he’s up to regarding numbering the population. The Bible tells us that Joab and his team took nine months and twenty days to “number the people”. I wonder how many more babies were born by the time he’d finished.

Not so today however, with the help of computers, the population of China, approximately one billion people, has been and continues to be “numbered”. And true to form, the men in control keep their Chinese subjects under one of the most repressive regimes on the face of the earth.

What many of us may not realize is that China is simply a test tube for the rest of the world. You see, right now, today, there is an ongoing international “numbering of the people program”.  The Bible has a code name for it: 666. This electronic system of buying and selling is one of the principal signs of our times. The innocuous “national identity card” is at present the snare the fowler is using to number the peoples of the world in preparation for something infinitely more sinister than what King David had in mind.

You would be wise to take note that in the following Bible verses, Jesus says “he causes ALL to receive…”

Revelation 13:16, 17. And he causeth all, both small and great, rich and poor, free and bond, to receive a mark in their right hand, or in their foreheads: And that no man might buy or sell, save he that had the mark, or the name of the beast, or the number of his name.

Revelation 12:14… The Keys are our Wilderness

Don’t be alarmed, we haven’t yet reached the endgame. There is still time to uncover the trap, and once it’s exposed, we can find a way out. The next step in this worldwide Mark of the Beast numbering system is a user-friendly microchip; to be injected under the skin of the unsuspecting human. However, in Revelation chapter 12, there is a key that holds a way of escape from this damnable microchip.

Revelation 12:14 And to the woman were given two wings of a great eagle, that she might fly into the wilderness, into her place, where she is nourished for a time, and times, and half a time, from the face of the serpent.

Now the woman in this verse represents the body of believers. So what or where is the wilderness? Well, with a world-wide numbering system in place, where no one can buy or sell, which, of course, includes travel, medical, food, electricity…umm, you name it, it’s covered, where on earth could the body of believers run to? Ok, so Moses ran into the wilderness, and so did Elijah. Yes, but they were prophets. Well, the same power they had has been promised to you also. Remember the Holy Ghost and Acts 2:17?  Every one of God’s promises has a key attached. And the key to receiving God’s power for the hour is faith, and faith only comes by reading and believing His Word. It’s not too late, but one day soon it may be. So no time to lose; get out that Bible and start reading and actively participating in what the Word of God is directing you to do.

“The Spirit World is our wilderness and the Keys of the Kingdom open the way”.

VIDEO The Keys are our Wilderness

KEY PROMISE: “Nothing is beyond the power of prayer to heal when you claim the keys of miracles.”

The Keys are our Wilderness

Heading for the Exit with the Keys

Moving into the Wilderness