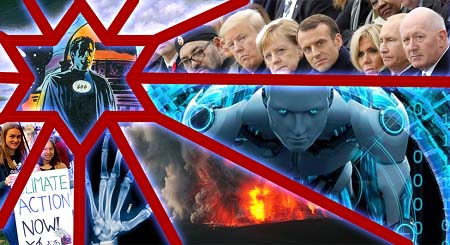 Jesus speaking: “Man has always worshiped the works of his own hands; he has grown especially proud and arrogant in these days leading up to the revelation of the final beast. The day of his miracles is at hand. He has the world firmly in his grip. I reveal My secrets to My servants the prophets. In the days of your father David, I led him to watch the news, and to analyze the events he watched on television. When it was time to reveal to him My deeper secrets, I would sometimes ply him with wine. Other times, it was in dreams and visions upon his bed that I would reveal the future to him.

With you, I have asked that you put away these old methods of communication. I have given you New Wine, new spiritual weapons to use in your fight with Satan. I have asked you to dive deeply into My Word. I have asked that you trust implicitly in the gifts I have given you. The gift of hearing from Me daily, and recording that still small voice you hear in your inner ear. I have asked that you trust your channel to the spirit world and in the helpers that surround you night and day. I have asked you to put away the news of the AC’s, and the opinions of men, even of those within My old guard. This has taken great faith; yet I say; I wish to take you further, I wish to take you deeper into the spirit world. To get the deeper things of My spirit, you must leave the veil behind and not be in such haste to come back from My world into your own. Trust is what I am asking. I need you to believe what you hear from this side of the veil, to follow the Words that you hear and go deeper, listening more intently and asking more questions. You don’t have to fear being trapped here in this realm and becoming like Enoch, of no earthly good; for I say, the deeper you go, the more earthly good you become.

I revealed to your David only part of what this verse means…in short; the reemergence of the old Roman Empire in the days of the final beast. Now allow Me to reveal more; Corona is a tool he uses to help him bring about the fulfillment of this vision I gave John. His empire will be of the strength of (iron) Rome, a total dictatorship, and yet mixed with clay, democracies. The corona tool is being used to bring those clay governments under the iron rule of the last Caesar. For he will indeed give them back their life if they embrace this dictum, but if not, they will surely die by captivity and by spoil and by fire…(firing squad?) many days.”

“With you, I have asked that you put away these old methods of communication. I have given you New Wine, new spiritual weapons to use in your fight with Satan.”

“And I saw one of his heads as it were wounded to death; and his deadly wound was healed: and all the world wondered after the beast”

Got Your Key, Then Let’s Go

Heading for the Exit with the Keys

See: Who are the 2nd generation: https://mystical-bible.com/the-second-generation/

Monsters in the Wilderness

One thought on “A Deadly Wound Healed”