A Dream of God’s Thundering 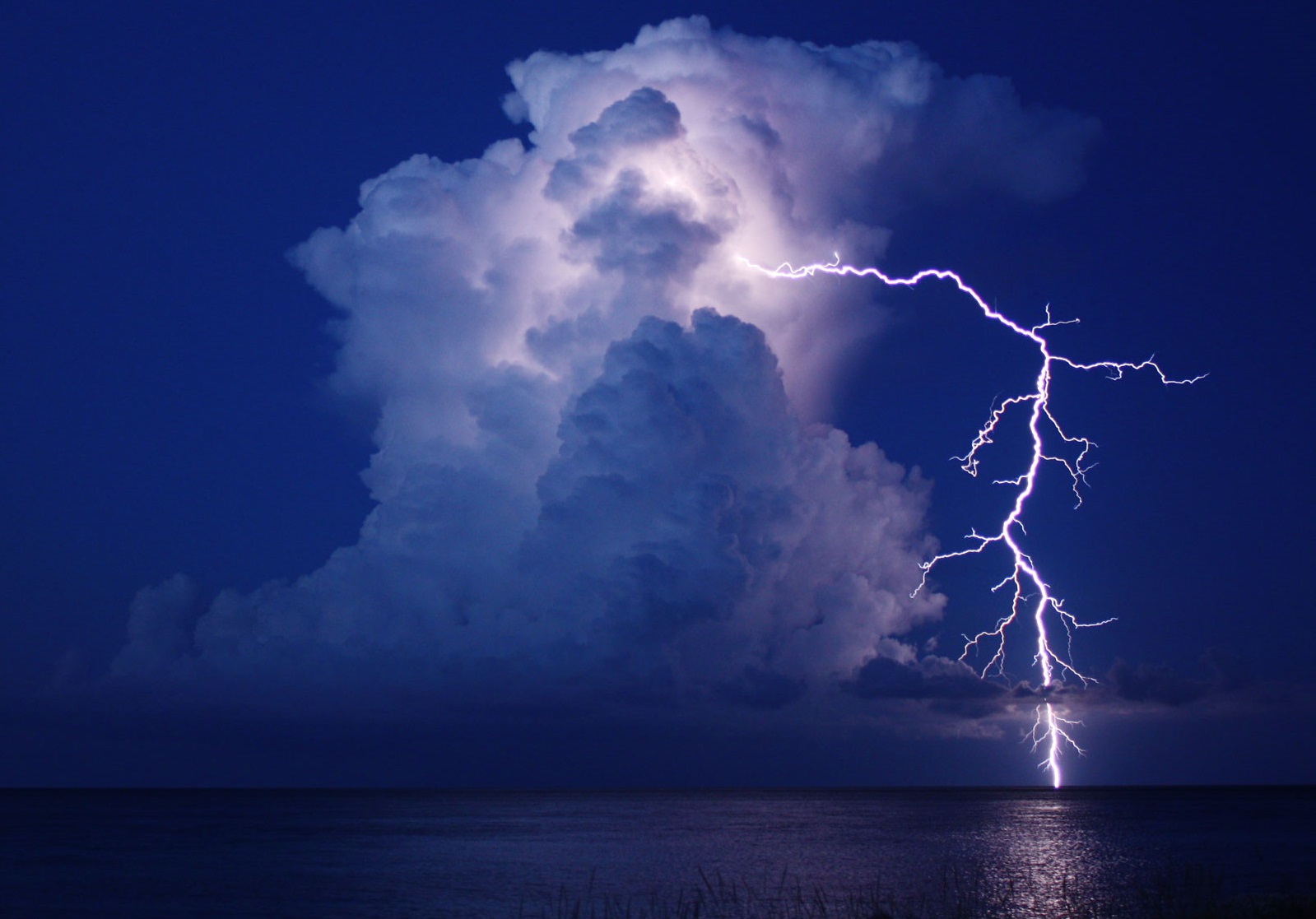 LET IT BLOW! DON’T STOP IT!

“If you try to shut up the house and protect yourself from it, it’ll blow the house in right on top of you! Just give it a clean sweep, let it blow right through and blow itself out. Don’t worry, let’er blow! It can’t hurt anything if we just let it through. Don’t try to stop it. Just let it blow through.”

Keep turning the keys, My beloved. Use them fully and frequently, and we shall accomplish that which My heart desired in My creation of you, in My calling of each one, and the victory shall be won through you, My conquerors called since the beginning of time. Defeat the Evil One’s puny power and efforts through the power of the keys which you hold and which I have turned this day. Let the wind blow through, continually and steadily, that she may keep your hearts stirred with the moving of My Spirit through all that is to come. Just let it blow, as you have done through your prayers this day, and it shall work for you. (End of message from Jesus.)

It was all in slow motion. I was standing in an unfinished concrete house during a storm. There were no windows or doors,  just empty spaces. So I was looking out through the empty windows and on two or three different occasions lightning hit the ground right in front of me. It was as I said in slow motion and very dramatic. The last strike before I woke up was very slow and spectacular, and it almost seemed the strike was suspended in time.

Then I woke up. It was very early morning and still dark outside. I got up and walked outside; it was raining. As I stood on the front porch, suddenly a dramatic booming lightning hit very close to the house. A bit shook up, I made my way back into the house thinking that the dream and coinciding lighting strike must have some meaning. The only person that was awake in the room was my wife. She said, “I haven’t heard lightning like that before. It was like a gunshot, no rumblings, just this almighty explosion.”

The next morning my wife was led to look up verses on God’s thundering because she too believed Jesus was trying to tell us something. At the same time she was feeling that there was something more to all of these 22’s the Lord is giving us. 2022 is a very significant year to be sure. “What could it be You want us to see in this Jesus? You have given us the prophecy The Key to 22, which talks about a portal into, not just tribulation but The Tribulation of Matthew 24.” But still she kept wondering if there was more. So “thundering” is where she started looking in the Bible, and the first verse that came was 2 Samuel 22:14 The LORD thundered from heaven, and the most High uttered his voice.

In the Holman’s Bible edition she found: Job 36:33 The thunder declares His presence; the cattle also, the approaching storm. (What does cattle have to do with presence? Intriguing, considering the fact that we live right next door to a cattle ranch.)

Joel 2:11 And the LORD shall utter his voice before his army: for his camp is very great: for he is strong that executeth his word: for the day of the LORD is great and very terrible; and who can abide it? (Our time of war has come and our Captain gives the rallying call before we go in…the Great Tribulation must be traversed in order to enter the promised land of the millennium.) [Note; 2x 11=22]

Psalm 77:17 The clouds poured out water: the skies sent out a sound: thine arrows also went abroad. :18 The voice of thy thunder was in the heaven: the lightnings lightened the world: the earth trembled and shook. :19 Thy way is in the sea, and thy path in the great waters, and thy footsteps are not known. :20 Thou leddest thy people like a lock by the hand of Moses (David) and Aaron. (His arrows are His Words of warning, that go before Him, and the sea often represents the people.)

When the lightning struck, it was over a small mountain behind the house. It had been raining quite heavily all night long. She then began wondering what significance today’s date had on the storm and ensuing dream and thundering.

My wife underscored verses 20 to 22, yet whilst reading the whole chapter I saw three parallels therein. The first was speaking of fleeing into the wilderness with wings as is described in Revelation 12. But not just fleeing for fleeing sake, but because the horrors of this world have overwhelmed me. This is what the Keys of the Wilderness are for, this Key is the one Moses, among others had in his possession.

Psalm 55:3 Because of the voice of the enemy, because of the oppression of the wicked: for they cast iniquity upon me, and in wrath they hate me. :4 My heart is sore pained within me: and the terrors of death are fallen upon me. :5 Fearfulness and trembling are come upon me, and horror hath overwhelmed me. :6 And I said, Oh that I had wings like a dove! for then would I fly away, and be at rest. :7 Lo, then would I wander far off, and remain in the wilderness. Selah. :8 I would hasten my escape from the windy storm and tempest.

A note from my wife: I’d already found the following verses and text before reading what you had written regarding your dream and lightning experience.

The Children of David at Kadesh Barnea

I then looked up the significance of Kadesh on the internet:- (And you can’t miss seeing the parallel here in the lives and wanderings of the Children of David.) [Download our pdf on Ezekiel 36]

Kadesh Barnea is a region located in the Desert of Zin that is mentioned numerous times in the Old Testament. It was located somewhere along the border of Edom and Israel, southwest of the Dead Sea. Kadesh Barnea, sometimes simply called Kadesh, is connected to many significant events in Israel’s history, specifically in the Pentateuch. The name Kadesh Barnea is thought to mean “the holy place of the desert of wandering.” [Note: Right now I’m reminded of the MO letter “Benefits of Backsliding”….if you are truly searching for answers, your wanderings through the desert of Zin (system) will lead you back to your Holy calling.]

Kadesh Barnea served as a place of combat in the book of Genesis when Abraham fought the Amalekites there (Genesis 14:7). It is ironic that the very place where Abraham experienced victory over the Amalekites is where the Israelites later failed to believe that God would give them victory in acquiring the Promised Land (Deuteronomy 9:23). The account in Genesis also includes Hagar’s meeting with the Angel of the Lord “between Kadesh and Bered” after she was mistreated by Sarah (Genesis 16:14).[Note: If your heart is right and you feel that the Reboot was wrong, then meet your Kadesh and take hold of the promises given in the Words of David.]

Kadesh Barnea seems to have been a regular camping spot for the Israelites throughout their years of desert wandering (Numbers 13:26; 20:1, 14; 33:36). It was at Kadesh that Miriam died and was buried (Numbers 20:1). [Maria, is a derivative of Miriam.]

Two significant events that occurred at Kadesh Barnea were the Israelites’ faithless refusal to possess the Promised Land (Numbers 13:32–33) and their opposition to Moses at not having enough water (Numbers 20:2–5). These two events, marked by unbelief, grumbling, and disobedience, directly affected Moses, Aaron, and the Israelites. [Note: To pass on to our promised land we must pass through Great Tribulation…are we ready this time to go in, are we ready to believe the Words of Moses David?]

The men who had left Kadesh Barnea to scout out the Promised Land, except for Caleb and Joshua, failed to believe that God could give them possession of Canaan (Numbers 14:30; Joshua 14:7). Instead, they insisted that the people of Canaan, who included the Nephilim, were too powerful for them to fight. The ten scouts bringing the evil report persuaded the people that the land would be impossible to acquire (Numbers 13:32–33). Because of their failure to believe, the Israelites had to wander in the desert for another 38 years, waiting until all those who were 20 years and older died, so that the next generation could take possession of the land (Numbers 14:29; Deuteronomy 2:14). [Note: No doubt this and many other verses were the reason “The Family” was ordered back to the Bible. The Words of David, were in a sense taken away from the children because of unbelief. Dad had already done all the work for us, but no we had to see for ourselves. Isn’t it high time that we grasp the truth, turn around and rush to our destiny.]

Years later, Moses and Aaron were also denied entrance into the Promised Land because of their disobedience to God at Kadesh Barnea. God had instructed Moses to speak to the rock to bring forth water for the grumbling Israelites, but he disobeyed by striking the rock twice (Numbers 20:12). Because the Israelites had failed to believe and obey the Lord, their arrival into the land “flowing with milk and honey” was postponed until Joshua led the younger generation out of the wilderness by the command of the Lord. (Note to COD…surely we must see the post Reboot connection here.)

In the desert of wandering, the Israelites experienced plagues, death, and testing. The Israelites failed the tests that took place in Kadesh Barnea, and that remained etched in their memory forever. Their unbelief led to the postponement of entering Canaan and claiming God’s blessings (Psalm 95:8–11; Hebrews 3:7–19). May we not follow the unbelief of those who did not trust God to fulfill His promises. When times of testing come, may we display the faith that Joshua and Caleb had in trusting God at Kadesh Barnea. (end of part 1)

Podcast: A dream of

Even wise virgins sometimes slumber, but it is high time for all to shake off the bands of sloth. It is to be feared that many believers lose their strength as Samson lost his locks, while sleeping on the lap of carnal security. With a perishing world around us, to sleep is cruel; with eternity so near at hand, it is madness. Yet we are none of us so much awake as we should be; a few thunder-claps would do us all good, and it may be, unless we soon bestir ourselves, we shall have them in the form of war, or pestilence, or personal bereavements and losses. O that we may leave for ever the couch of fleshly ease, and go forth with flaming torches to meet the coming Bridegroom! My heart waketh. This is a happy sign. Jesus will hear our hearts, will help our hearts, will visit our hearts; for the voice of the wakeful heart is really the voice of our Beloved, saying, “Open to me.” Holy zeal will surely unbar the door (Spurgeon [Member of the Warrior Band] “Morning and Evening”- 24th Sept. Evening)

To the 2nd generation…Your destiny is here

The final act begins…The coming of the wicked one

One thought on “A Dream of God’s Thundering”